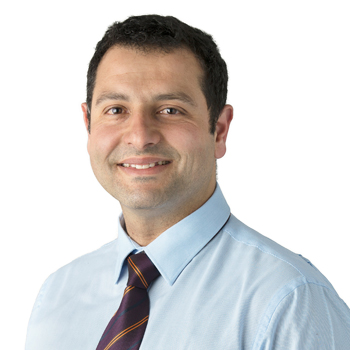 
Simon graduated from Monash University in 1997 and worked as a hospital medical officer for Southern Health until 2001. Simon has been senior lecturer with Monash University Faculty of Medicine, Nursing and Health Sciences since 2000 and Associate Investigator with Monash University Centre for Synchrotron Science since 2009. He has worked as an anatomical pathologist at The Royal Women's Hospital and Southern Health from 2008 to 2013. Simon joined Australian Clinical Labs (then Healthscope Pathology) in 2010 and further developed his interests in Gynaecological and Breast pathology, Infertility, Urology and Cytology. Simon completed his Diploma of Management in 2011. From 2011 to 2013 Simon was Coordinator of the Royal College of Pathologists of Australasia (RCPA) Victorian Anatomical Training Program and between 2013 and 2018 was RCPA Victorian State Councillor and in 2012 he received the RCPA Outstanding Teacher Award. Simon was a member of the Clinical Advisory Committee for the Commonwealth Department of Health’s Digital Health Agency. In 2018 he became Clinical Director of Anatomical Pathology for Victoria and South Australia for Clinical Labs, focussing on business development and marketing. He is also a Medical Testing Assessor for NATA and is a member of the Anatomical Pathology Advisory Committee and examiner for the Royal College of Pathologists of Australasia.