Calprotectin testing for the diagnosis and management of IBD

Faecal calprotectin concentration is a useful, non-invasive method for distinguishing between organic and functional diarrhoeal disorders and for monitoring disease activity in established cases of gut wall inflammation. 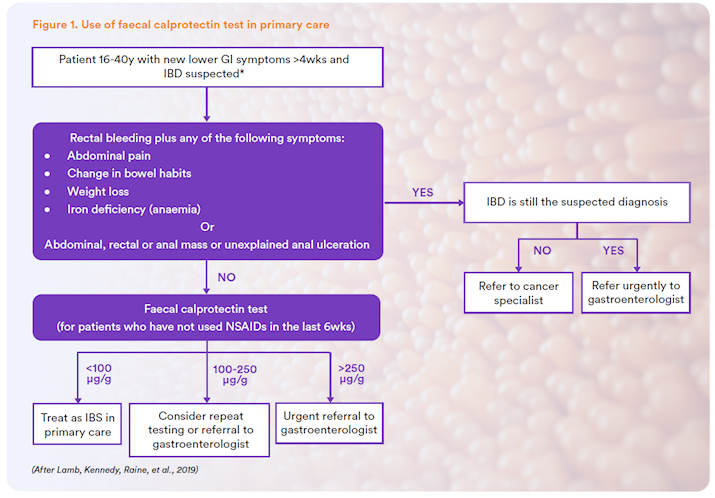 Calprotectin is a large protein with post-translational changes that include binding of each of zinc and calcium at different sites.

Although described in multiple cell types, the protein is generally used as a marker of neutrophilic inflammation. Calprotectin accounts for 60% of the protein content of the cytosol of neutrophils (Roseth, Fagerhol MK, Aadland, & Schjonsby, 1992). Actions of calprotectin include antimicrobial and anti-proliferative activity and an extracellular immunomodulatory effect. The name calprotectin was adopted because of its calcium binding properties and protective functions (Johne, Fagerhol, Lyberg, Prydz, & Brandt, 1997). As it is a member of the S100 protein family, it is officially designated S100 Calcium-Binding Protein A8 (HGNC Approved Gene Symbol: S100A8) (McKusick & Converse, 2015).

Calprotectin concentrations have been shown to reflect pathology in many tissues and in associated body fluids, including plasma, saliva, urine and synovial fluid and there is an increasing literature referencing its assay in multiple clinical conditions.

Widespread clinical application of measurement of calprotectin levels has evolved for the non-invasive
investigation of diarrhoeal gut disease, since the beginning of this century. Early faecal assays used stool volume vs. weight and the reported measurement units and RIs of these assays, therefore, differ from modern methods. Calprotectin in faeces has been shown to be a robust measure of neutrophilic inflammation of the intestinal mucosa. However, it is not specific for inflammatory bowel disease (IBD), being variably increased in other causes of gut wall inflammation and in various gastrointestinal malignancies and ingestion of some common drugs. Nevertheless, faecal calprotectin concentration has been shown to vary with the degree of inflammation (Bressler, Panaccione, Fedorak, & Seidman, 2015) and by some authors to predict relapse in IBD (Chang, Malter, & Hudesman, 2015). 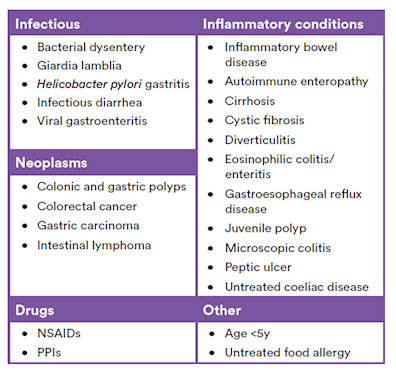 Although faecal calprotectin concentration increases somewhat with age in adults, it has been shown to be a superior non-invasive discriminatory test for the distinction between inflammatory and functional intestinal disease (Figure 2). PPV is increased by a raised, concomitant serum CRP. 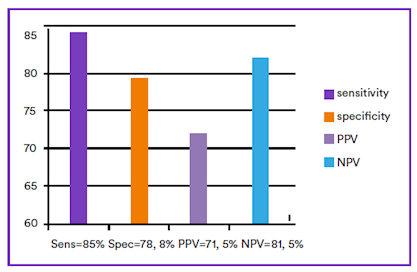 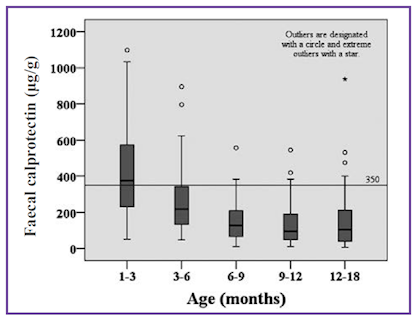 The same group have also published equivalent data for 274 children 1 to 4 years (Figure 4). 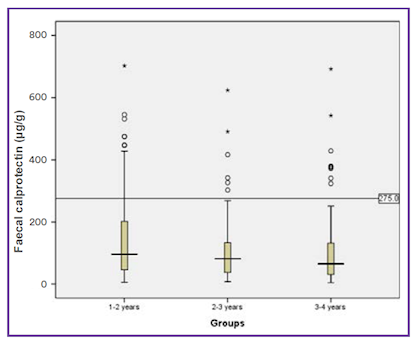 Most healthy adults will have a faecal calprotectin concentration <10 μg/g faeces. However, as the faecal calprotectin concentration is known to increase with age, RIs are usually established that account for miscellaneous factors, including age. These RIs should not be used for longitudinal monitoring when the patient should become their own reference.

Based on the expected values from literature reports and the manufacturer’s recommendation, Clinical Labs has adopted the following RIs for faecal calprotectin concentration in adult patients with clinically suspected IBD:

Faecal calprotectin concentration is a safe and reliable non-invasive test for inflammation of the bowel wall that can:

Because it is not specific for IBD, it must be interpreted in the clinical context.

The time between defaecation might affect the faecal calprotectin concentration; therefore, the first stool of the day is recommended. Stool specimens should be collected into a clean, airtight container without preservative and stored at 2-8°C. The sample must be received at the laboratory within 24hrs of collection. Stool specimens that are liquid or very solid may be technically unsuitable.

Results are available within 3 to 4 business days of the specimen’s arrival at our laboratory. 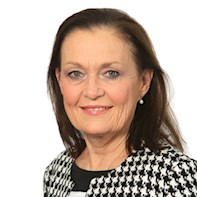 Associate Professor Smyth is a graduate of the University of Western Australia and a Fellow of, and former state representative of the RCPA. Associate Professor Smyth designed and implemented the Pathology programme for the School of Medicine at the University of Notre Dame Australia, Fremantle where she is a founding member of, and Associate Professor in the School of Medicine. She has a Graduate Certificate in University Teaching, qualifying her to supervise candidates for higher degrees as well as teaching undergraduate students. She is most interested in autoimmunity but has extensive experience including autoimmunity, transplantation, immune deficiency and allergy. Her publications are predominantly in the field of Bone Marrow Transplantation. Dr Smyth joined St John of God Pathology (now Australian Clinical Labs) in 2016.