Coeliac Disease: The pathway to an accurate diagnosis

If left untreated, coeliac disease can lead to major health complications for patients and severely affect their quality of life. To achieve an accurate diagnosis, a series of steps need to be carefully followed, to avoid patients being misdiagnosed and unnecessarily implementing restrictive life-long changes to their diet.

Coeliac disease (CD) is a chronic inflammatory CD4 T cell-mediated disease of the proximal small bowel induced by gluten present in wheat, barley and rye. It leads to atrophy of the proximal small intestinal villi resulting in nutrient malabsorption and is associated with diagnostic autoantibodies directed to endomysium tissue transglutaminase. In developed countries the incidence is increasing, but currently it affects approximately 1% of the Caucasian population. There is a strong genetic predisposing component with 10–15% of first-degree relatives of probands affected and 70% concordance between monozygotic twins. HLA-DQ2 and HLA-DQ8 genotypes are present in 99.6% of patients with CD, and the HLA type is requisite, but not sufficient for the development of disease. Clinical disease is initiated by consumption of gluten-containing wheat, barley and rye. Onset can occur in either childhood or adulthood, with a female to male ratio of 2:1. Once an accurate diagnosis has been reached, CD can be effectively managed through the implementation of a strict life-long gluten-free diet. 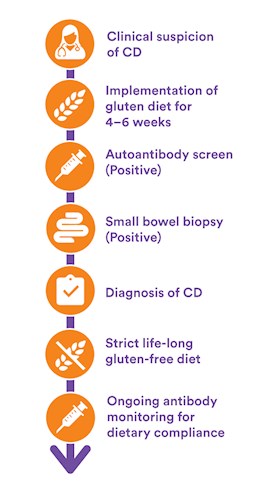 Along with a genetic predisposition (family history) of CD and gastrointestinal indicators such as chronic/recurrent diarrhoea, IBS, fatigue, weight loss, bloating and gas, abdominal pain, nausea and vomiting, and constipation, patients at high risk of CD may present with the following health issues:

Patients may also present with diseases found to be associated with CD, including:

The onset of clinical symptoms can be represented by the tip of the ‘Coeliac Pyramid’ (see Fig. 1). Coeliac disease may present with classic malabsorption symptoms (as already listed), or more typically remains silent, latent, or becomes apparent through a wide range of nonclassical symptoms arising from pathology in multiple organs (as previously listed). Therefore, a diagnosis of symptoms is likely to be missed unless CD is considered. If undiagnosed, CD can lead to nutrient deficiency and gastro-intestinal malignancy including enteropathy-associated T cell lymphoma (EATL) or intestinal malignancies such as adenocarcinoma of the small intestine, pharynx and oesophagus. 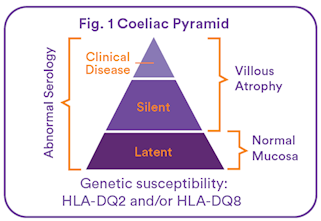 HLA-DQ2 or HLA-DQ8 genotypes are present in >99% of people with CD, but are also present in up to 40% of Americans, Europeans and South East Asians, and similar proportions of Australians. The enzyme tTG deamidates dietary gluten in wheat, barley and rye. Deamidated gluten peptides form molecular complexes with DQ2 or DQ8 molecules that activate CD4 T cells to release damaging effector cytokines. Helper CD4 T cells then activate B cells to produce autoantibodies to tissue transglutaminase (tTG) and to deamidated gliadin peptide (DGP), diagnostic serological markers of CD.

Autoimmune response to gluten (gliadin) in a patient with coeliac disease. 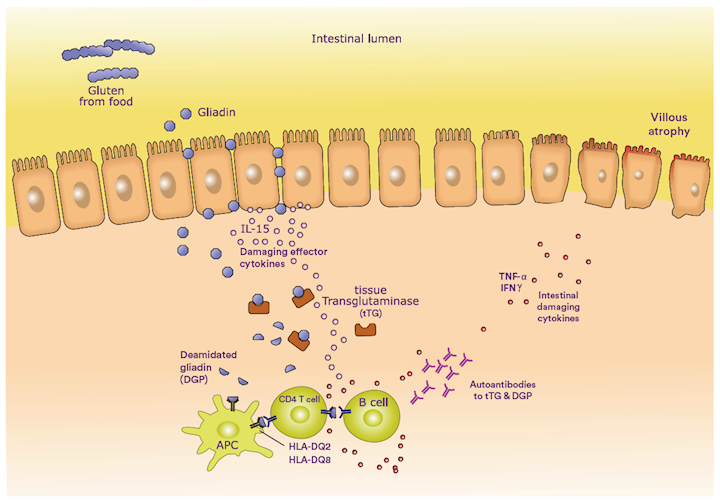 Ordering an IgA antibody to tTG test is the first step in an accurate diagnosis for patients at high risk of CD, as this is a very sensitive and specific blood test for CD.

Genetic tests for HLA-DQ2 and HLA-DQ8 genotypes should be ordered for high-risk patients when:

Other tests, such as a full blood exam, may be ordered to evaluate malnutrition, malabsorption and organ involvement.

If the patient tests positive for serological and genetic markers, a small bowel biopsy via endoscopy is recommended to confirm CD before lifelong treatment is implemented.

In patients with CD, activation of CD4 T cells leads to production of inflammatory cytokines which causes villous atrophy, inflammation and flattening of the lining of the small intestine, reducing the surface area of the bowel available for nutrient absorption. There is an infiltration of intraepithelial lymphocytes of natural killer and CD8 phenotypes.

Once CD has been formally diagnosed, via a combination of autoantibody blood tests, genetic blood tests and small bowel biopsy, treatment can commence. Although there is no cure for CD, the most effective treatment is a strict life-long gluten-free diet. Removing gluten from the diet allows the small bowel lining time to heal. If this diet is strictly adhered to, the patient’s autoantibody levels should return to normal within 6–9 months and their symptoms and villous atrophy should resolve. Relapse will occur if gluten is reintroduced into the patient’s diet.

While most of the intestinal damage caused by CD is reversible, some effects of prolonged malabsorption, such as short stature and weakened bones, may be permanent. It is therefore vital to detect and treat the disease as soon as possible.

For monitoring of dietary compliance, request a tTG antibody test.

Associate Professor Smyth is a graduate of the University of Western Australia and a Fellow of, and former state representative of the RCPA. Associate Professor Smyth designed and implemented the Pathology programme for the School of Medicine at the University of Notre Dame Australia, Fremantle where she is a founding member of, and Associate Professor in the School of Medicine. She has a Graduate Certificate in University Teaching, qualifying her to supervise candidates for higher degrees as well as teaching undergraduate students. She is most interested in autoimmunity but has extensive experience including autoimmunity, transplantation, immune deficiency and allergy. Her publications are predominantly in the field of Bone Marrow Transplantation. Dr Smyth joined St John of God Pathology (now Australian Clinical Labs) in 2016.